skip to main | skip to sidebar

Egg Fry Gravy and some nostalgia.

One of my batchmates from college, who is currently in the US, asked me if I could meet him as he was town. He also told me that one of our seniors wanted to join as well. I was excited to learn that my senior had moved to Bangalore. We used to talk quite a bit during college days because we pursued our BE in the same discipline. But after college, life takes you in different directions as you are swept by the proverbial tide of time. But when you're in college, you might not even explore your department entirely during your four year stay but there is one place where you went every single day. The boiling cauldron of emotions that was fueled by the denizens.

The college canteen was THE place for hooking up, talking to people, freeloading samosas off others and engaging in some harmless ragging/hazing and umm...getting a glimpse of the opposite gender. We're all (typically) under 21 and if you don't do these things in college, you might not get to engage in some of these life-enriching activities ever in your life. And trust me, while this might sound superficial, they do impact (often) on the way you think and look at people.It was the place where people had a bite before attending a job interview, with Baby, Sridhar (caretakers) wishing them all the best. Folks who made it came running back and were mobbed by not only their close friends, but folks who had never met them, for everyone knew a treat was in order. Tea was the official 'spirit' of celebration. For those who didn't get a job on that day, the canteen was a place of refuge and encouragement. A place to sit back and dissolve all their worries into a plate of Mysore masala dosa with piping hot sambar or another favorite. Egg fry gravy. Back in our days, mundane treats such as dosa, samosas etc. cost Rs. 6. The two delicacies I've mentioned, however, cost us Rs. 10. Those who purchased this on a regular basis were considered posh. Golden era, I tell you.

Well, if I go down this memory lane, I might end up meandering endlessly so I'll cut to the chase. The egg fry gravy served at our canteen was an extremely popular dish. It has "corrputed" many "pure vegetarians". It used to consist of a fried egg (half or full fried) with some tomato-onion gravy and some green chilies.

After talking to my old college mates, I had an instinctive urge to make some. However, we put a spin on it by incorporating some Bengali flavors. So here it goes: 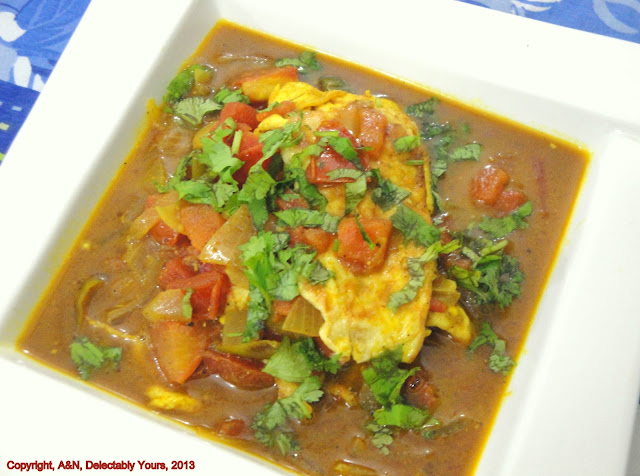 Disclaimer: these are approximate measurements. You could easily add more masala and chilies to suit this dish to your taste.

1.   Dry roast the ingredients for panch phoran masala and the coriander seeds. Grind into a powder with some salt using a pestle and mortar.

2.   In a pan, heat some oil and mustard oil. When the oil is hot, add the bay leaf and turmeric powder. Once the turmeric sizzles, add the onions and green chilies.

4.   Add the tomatoes and panch phoran masala. Add some more oil and mustard oil. Cook on medium flame for 5 mins.

5.   In the meantime, whisk the eggs, milk, salt, pepper and red chili powder. Make thick omelets in a pan. Cut them into large pieces and keep them separately. You could also fry individual eggs and serve it “rancheros” style by pouring some gravy on top.

6.   When the tomatoes are almost cooked (the skin should look shriveled and start to peel off), add 1 cup of water and kasundhi. Stir well. Adjust salt. Add the fried egg pieces and let it cook for another 2-3 mins.

8.   Serve hot with rice, roti or bread (the way it was done in canteen during my days).

Fairly quick and easy, this could be one of those dishes which could come in handy when you open your refrigerator only to see empty shelves devoid of vegetables staring right back at you. And quite perfect for that cosy, spicy, 'chatpata' meal that N always craves for :)
Posted by A_and_N at 9:11 AM

"It has "corrupted" many "pure vegetarians" - LOL for that statements as I am one of them. :-) Each one of us has so many memories in "canteens" and that's where I used to discreetly meet my then boyfriend (currently my husband). Your post evokes so many memories I tell ya!

Now i am back to my college days....that's an yum recipe..

Makes me nostalgic as well..Love to go back to my college days.

You are lucky to not only have fond memories, but likely, have the present hold up to the nostalgia.

A few years ago, we went to eat at a dhaba, fondly called Frags by us, that we used to frequent just outside the college hostel. The food was inedible! That was a memory crashed alright.

Why does "Nigella" get capital treatment, while the other spices languish by the side? I bet our Domestic Godess on the TV has something to do with it - she is so charming! ;-)